“The green landscape, the magnificent panorama and the view to the castle nearby inspires my imagination every time anew. The surrounding area of the village has a big influence on my writing and my books. Very often I am in the mood to go on a walk or to go for a ramble” – says Amanda Laurie, German writer. I spoke with her about her books and her life as a writer. Read all interview below:

Piotr Balkus (Culture Drive): Please tell us about your short book “Ein Hauch von Magie” published in 2013.
Amanda Laurie: “Ein Hauch von Magie” is a collection of three short stories, each with a touch of magic. The first and also longest story is named “Düstere Gassen”. This story is about Finnlay, a fifteen-year-old boy who lives in the London of the 19th century. Raised in poverty, he tries to keep his head above water with thefts. His best friend, a little goblin, tries to put him on the right path. Furthermore, a mysterious creature appears in the course of the story, which becomes a danger for Finnlay. I got the idea to this story during a visit to London in 2010. This vibrant city has impressed me with its imposing buildings and those many people. Photos of my trip are also part of the cover, which was designed by my husband. The two other stories in this book, “Nebel” and “Verflucht”, act in the present time, nevertheless, they contain also magical elements. “Nebel” leads the reader to Iceland, where a young couple torment themselves with the bicycle through the Highlands. The fog, becoming closer, lets them despair increasingly. Finally, they don’t trust their own eyes any more. Last but not least, “Verflucht” tells the story about Tom, whose life consists only of inconveniences, since he has fallen out with his lucky charm.

“Flucht durch die Wälder” is about a father – son relationship. What’s the message behind this story?
The book “Flucht durch die Wälder” is also a collection of short stories. All the four stories have in common that the young protagonists must pass adventures and are sooner or later on the run. In addition, each character has a problem – either with its father or with its abductor. “Der Prinzenraub” tells the historical kidnapping of the two princes Ernest and Albrecht of the Altenburg Castle. Albrecht increasingly doubts his value because he is only the younger son and stands in the succession behind his older brother. Maximilian, main character in “Gefallen”, is also of noble birth. Raised in a golden cage unexpectedly he is taken in captive and gets to know the other side of life. The longest story in the book is named “Getäuscht”. On a trip Constance is attacked and kidnapped. Until she can hope for rescue she is harassed by her brazen abductor. Especially I like the character Rafael from the story “Rafaels Erbe”. Years ago the prince went away from home to escape the paternalism by his father. Since then, he lived incognito among the people. But now the past catches up with him… This story was created while working on my novel – working title “Horizon”. It is also about a young man who lives in a fictive world. He has a difficult relationship with his father, who cuts him in many ways in his freedom. While I improved the figure of the local hero for “Horizon”, I got the idea for the character Rafael, who shows some parallels to the main character of my novel.

Do you in your books write about German problems particularly, or rather about universal problems?
In my books I write about general problems, which are present all over the world. All main characters of my short stories are young and on the way to be adult. In this difficult period of life they have to find their own place in life. But always they are faced with seemingly unsolvable problems. First of all, they don’t know how to handle with it. They reach their limits, doubt their own value, develop fears and sometimes also hatred. But finally, my characters find a way for themselves, against all obstacles, and with it a happy end. The problems are difficult relationships between two or more persons – for example the typical teenage problems between parents and children. But it can also happen that someone tries to impose his will on others with force. These problems run through the everyday life of many people. That’s why many of my readers can identify with my characters.

You describe yourself as an indie writer. Does it mean you publish your own
books?
As an independent author, also called selfpublisher, I am responsible and in control for every step from the first written line up to the publication and marketing of the finished book. There is no publishing company behind me which would take over these tasks. This has the advantage that I may determine the entire process of the book production by myself, starting with the choice of the title, layout, distribution, price and, of course, advertising. Also I can let my creativity run freely for the cover design. Publishing authors have usually no influence on these tasks. I must also bear all costs for this myself. For example, if I engage somebody for the editing or the cover design. The beginning of my life as an independent author was difficult, because first I had to get familiar with all tasks. For everything there are some rules to follow. Also you need various computer programs, you have to learn the use first. On the one hand it was really interesting to me to acquire this knowledge, on the other hand it was also very time consuming. Time, which a publishing author can already put in its next manuscript.

You live in a village surrounded by woods and forests. Do you like this landscape?
Rather by chance I moved in this little village about fifteen years ago. However, the scenery here is really impressive. Looking at a castle built imposingly on the top of a hill the village is surrounded by fields and woods. Raised in a city, I had to get used to the quiet, at first. Now I like this place so much that I don’t want to go away anymore. With my husband and our three children we live in a house at the edge of the village near a forest. I love this green and peaceful surroundings. Here I find rest from everyday life.

How the village surrounding influences your books?
Actually, the surrounding area of the village has a big influence on my writing and my books. Very often I am in the mood to go on a walk or to go for a ramble. The green landscape, the magnificent panorama and the view to the castle nearby inspires my imagination every time anew. Furthermore, on some days I see hardly any other people. If I stand still at a place from which I can see no houses or streets, but the surrounding woods and fields and hear just the sounds of the animals, no disturbing noises come to my ear, then it is particularly easy for me to imagine the life a few hundred years ago. Then also the idea is not so far away, that immediately a troop of horsemen breaks out from the forest and – voilà, there is a new scene emerged in my head. I must write down this idea after my return home, so I can’t forget it. Sometimes only with pencil on paper, when I have more time on the computer. 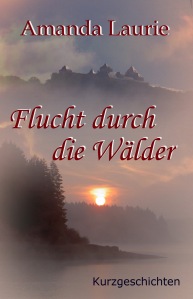 Do you agree that Germans are book lovers? How you can explain that phenomenon?
Oh, I think many people in Europe are book lovers – and the Germans too, of course. On the one hand there is a lot of knowledge in the books, so as the german saying goes: ‚Lesen bildet’ (reading educates). On the other hand, in Germany appeared a lot of great writers in the past, which we are proud of. Even in school the children are acquainted early with literature. However, I think nowadays many people read a book, so that they can escape from the everyday life at least for a a few moments. I also read with pleasure and much – about 50 books in a year.

Are you planning a new book for 2014 or it’s too early to say?
Currently, I edit the manuscript for a youth novel – working title “Horizon”. The plot is set in an alternative world. Corin, the hero in Horizon, is fourteen years old when the story begins. As the son and heir of a noble house his father has high expectations in the boy, which evokes the spirit of contradiction in him. Finally, he tries on his own to find his way in life and endangers not only himself – because in this world is war. This book will be published in spring 2014. Furthermore, I write a historical romance novel, which is set in England in the 19th century. With this novel I hope to reach a new readership – next to the youthful readers – namely the friends of good love stories. The publication is planned for autumn 2014. Unfortunately, at the moment my books are only available in German. But I hope that at a later time they get a translation for the English-speaking readership, too.